The Oxton Lionesses left their lair on Saturday to take on local rivals Neston, in what is always, a keenly anticipated fixture. Having started their campaign strongly this season, the girls were keen not to drop any points in this, often hotly contested, match.

With injury and illness threatening to dampen the spirits, Oxton got off to a slow, steady start, and despite pressuring the opposition goal, Oxton could not find a way through the Neston defence.

Part way through the 1st half, the dead lock was broken, but it was Neston that dealt the first blow, with a well-struck short corner, to take the home side into a 1-0 lead. This seemed to awaken the lionesses, undeterred the girls fought back and it wasn’t long before their hard work paid off, Oxton earning themselves a short corner which Lucy Jamieson brilliantly deflected past the keeper to find the back of the net and get the visitors back on equal terms. Oxton started to find their stride and it wasn’t long before a well-worked attack down the right was calmly converted by Taryn Rostenne to give the girls a 2-1 lead at half time.

Going into the second half, the girls were determined not to let their unbeaten record slip, they worked hard as a team to build the pressure once again and it wasn’t long before their patience paid off, this time Jules Armstrong finding the net. Neston continued to try to find a way through the Oxton press, but at each attempt their efforts were thwarted by a composed and determined Oxton defence. The final blow came from a quick turn over that found Carrie O’Callaghan out wide on the right, Holly Mealor used her speed to take advantage of the space and slipped the ball past the Neston defence to Taryn who was lurking at the top of the D. Taryn’s fantastic, first time strike found the bottom left hand corner. BOOM 4-1 to the visitors!

With other results of the day going their way Oxton L1s find themselves at top of the table. Now they just need to stay there! 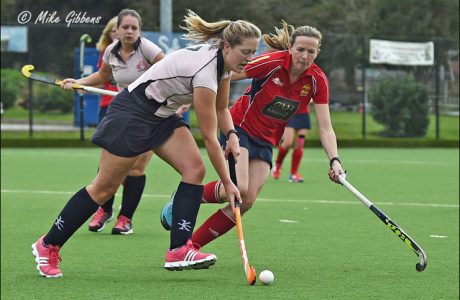