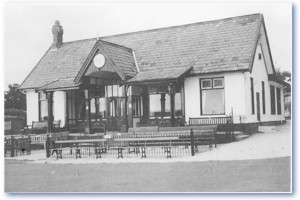 Just how the Oxton Club came to be founded is unclear, however by 1888, some of the wealthy merchants of Liverpool had built their large homes around Birkenhead Park and during this time members of this newly established community set upon creating the first ever hockey club in the Wirral.

What is certain, however, is that a number of clubs in Cheshire, for example, Bowdon (1887), Timperley (1886), Sale and Alderley Edge (both 1888) were founded at about the same time and that Oxton played against them.

The Cheshire Hockey Association was also founded in 1888, in the same year as Oxton.

Hockey matches were then played at Birkenhead Park with the first ever County match to be played on the Wirral in 1895 between Cheshire and Lancashire. It was not until the turn of the century that Oxton Hockey Club integrated itself with Oxton Cricket Club and found residence in Townfield Lane, formerly Shoe Lane, from the Earl of Shrewsbury’s estate, a fine field in open country on the west side of the Oxton ridge. The club took tenancy of two pitches at Townfield Lane, with the use of the pavilion as well during the winter months – a most satisfactory arrangement which continued until 1967. Another County match where Cheshire played Middlesex was held at the then new ground in 1900. 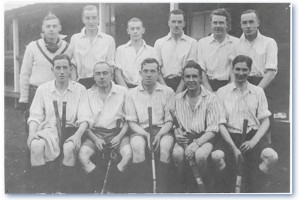 The club saw a fruitful period between 1903 – 1910 with several Internationals and County players within its ranks, most distinguished was C W Marshall who played for England six time during 1907/08 and who later became Club President.

Nobody knows for certain what happened to the club during the 1914-18 War, when so many members of the club like so many young men across the country lost their lives.

The Club gathered momentum during the 1920s and by 1930 four teams were playing regularly on a Saturday. Again many players playing County Hockey, most notably Oxton’s captain, R. M. Stewart, who played for Cheshire thirteen times and captained an undefeated Cheshire side between 1922 and 1924.

Until the thirties, most of the new recruits came from the Universities and public schools in the South of England, where hockey was already well established, and it was during this decade most importantly for Oxton that saw Birkenhead and Calday Grammar Schools introduce hockey to their pupils. Birkenhead’s commitment to hockey was perhaps somewhat lukewarm whilst Calday embraced the game to its fullest and to this day continues to produce many outstanding players.

Until the Second World War opponents poked fun at Oxton for their playing colours, narrow blue stripes on a white shirt, nicknamed pyjama jackets. It wasn’t until after the war recognisable red shirt we all know so well was introduced – and safe to say the teams were no longer ridiculed!!

The Second World War again interrupted Club progression and for the second time in its history the Club went into suspense. This time it was held together by the hard work of Donald Crawford (Captain), Philip McGill (Hon. Secretary) and Jim Bibby (Hon. Treasurer), they even managed to field a team for a number of games in the Winter of 1945/46 – what a triumph during such a time.

The 50’s saw a recovery in Oxton’s fortunes. During the season 1957/8, with Peter Cross as captain, only two games were lost. Five teams were fielded for the first time in 1952, six teams were being fielded every Saturday by 1958. Competition for a place in the First XI was never so keen and Oxton had become recognised as one of the most formidable clubs in the Northwest of England.

The matter of the rent of the pitches from the Cricket Club had always been a sore point and shortly after the Club’s 75th Anniversary celebration there arose a demand for an improvement in the playing surfaces. The friction between the Cricket and Hockey Clubs was too much for a number of members who favoured leaving Oxton altogether and merging with the newly-formed hockey club at Neston A General Meeting held in 1967 saw club’s name changed to ‘Oxton Cricket Club, Hockey Section’.

The First XI had reasonable successful in the early 1970’s under the recently formed Northwest League, threatening to achieve a top position in the First Division. However, the end of the 1976/77 Season marked the end of Oxton’s dominance of hockey on the Wirral with several key players leaving the club, the next ten years saw Oxton into the unknown territory of the lower leagues.

The Club took at change in fortune by the late 1980s’ going from strength to strength and regaining it’s former glory. The 1990s was the most successful decade ever in Oxton’s history. Our first major success was winning the H. A. Trophy at Milton Keynes in 1993 beating Halifax, a very special moment in our Club’s history. In that same year the men’s U21’s won the Cheshire Cup with a very young side.

1997 was a major landmark in Oxton’s history, the first ever Ladies’ section was officially formed and entered into the Cheshire League. The very young side guided by a couple of seasoned campaigners topped the league in their first season, and then went on to gain promotion for the next 5 (yes five) seasons finally getting into the Northwest Feeder league, an amazing feat and congratulations to all who played. Since then the ladies membership has expanded and now boasts of three ladies teams playing at different levels of the Cheshire Women’s League.

Following the arrangements made in 1967, the Hockey Club had ceased renting the facilities at Townfield Lane, and had integrated fully as a part of Oxton Cricket Club. The relationship with Cricket had never been easy and the situation came to a head in 2009, when following the Cricket Club’s attempts to impose excessive disciplinary sanctions on the hockey section. Hockey members voted to terminate the relationship with the Cricket Club, and to re-establish Oxton Hockey as a separate Club operating on a truly independent basis. It was therefore necessary to find a new home base for social purposes, and an agreement was quickly established with Irby Cricket Club. At broadly the same time in 2008/9, it had proved impossible to agree acceptable terms with Birkenhead School for the resurfacing and future use of the McAllester Field astroturf pitch. Accordingly, the joint venture came to an end and new arrangements were made with Calday Grange School for the use of their pitch at Paton Fields, adjacent to the A540 at Caldy. This became the Club’s main match venue, with the continued use of other pitches at West Kirby Grammar School and Birkenhead Girls School. In 2015 the club joined Caldy Sports Club as affiliate members to offer a social base over the road from the main pitch.

In recent seasons our Mens’ 1st XI have been our best ever, both on points scored and finishing 2nd in 2012/13 and 2013/14 in the Northern Premier league, just missing out on promotion to the National League. 2012 also saw a great achievement in the Club’s history by triumphantly beating Bowdon 1st XI 4-3 in the prestigious Cheshire Cup. The team narrowly missed out on further Cup glory by ending as runners-up against Brooklands MU First XI in the 2013/14 season. In 2015 the club appointed Russell Hornby as lead coach of the men’s first team, supported by former European Player of the Year Chris Ashcroft and promotion to the North Conference of the National League was secured at the end of their first season. We all hope the team can continue taking the Club to new heights, securing the future of the Club for many years to come.